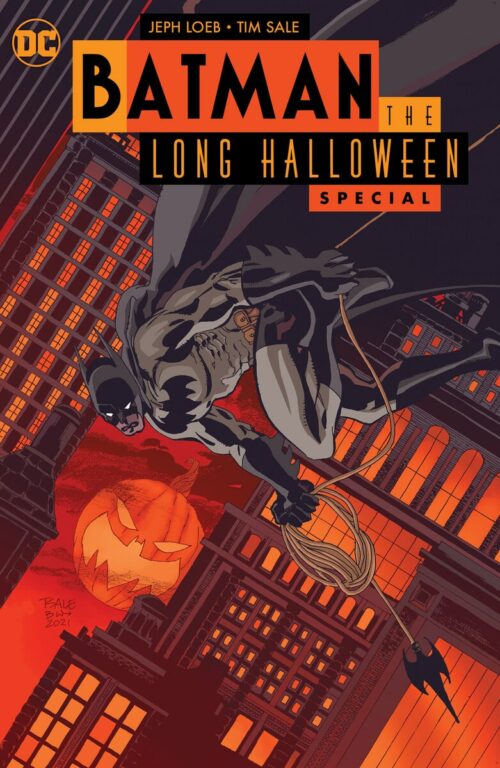 Just as I’d mentioned the pairings of Brubaker/Phillips and Condon/Phillips as being a mark of quality, you can certainly have Loeb/Sale in that list.

The Long Halloween was one of the first Batman maxiseries I ever read, and since that time, has remained firmly in my top 5 Batman stories of all time.  A series that managed to incorporate everyone in Batman’s rogues gallery effortlessly into the story, while exploring the dynamic between Batman, Harvey Dent & Commisioner Gordon, it also manages to focus on the crime families in Gotham as well as introduce a new villain.  It was all absolutely effortless, brilliant writing weaving the tale and career best art from Sale as he presented a noir tinged, stylised version of Gotham.  It’s no surprise that Christopher Nolan’s The Dark Knight was so heravily influenced by the book.

So when I see we’re returning to this world, with the original creators, to tell a one shot tale, I approached it with massive excitement but also with a tinge of trepidation.  Could it possibly match up to the original masterpiece?  Would it add anything new?  Was there any point?

I’m glad to say it was a big fat yes on all counts, as this was one of my favourite single issues of 2021.  The set up alone was brilliant.

In The Long Halloween, Batman was chasing a killer who always committed the acts on holidays.  So a murder takes place on Halloween, on Thanksgiving, on Christmas etc.  In Batman lore, the obvious suspect was Calendar Man. However, it was not him, but someone who would take on the moniker of The Holiday Killer.  I won’t reveal who that killer was, as trying to work it out is one of the big pleasures of a first read through.  However, it has always grated on Calendar Man that someone essentially stole his gimmick so to speak, so this special starts out with him essentially trying to reclaim his name, by committing criminal acts in the lead up to Halloween.

Harvey Dent/Two Face has also resurfaced, Robin is kicking around, and the relationship between Gordon and Batman is as strong as ever.

Considering this is only a 48 page special, there is so much great storytelling here.  It feels longer.  Jeph Loeb has slid brilliantly back into this world and it’s like he’s never missed a beat.  There’s a brilliant central mystery and noir sensibility driving the story, but there’s also some levity and humour.  Barbara Gordon wanting to go trick or treating with Robin (who of course is much younger here than Batman), and she dresses up as Batgirl right in front of her father to do so?  Fantastic stuff.

Sale’s art, while not quite as sharp and detailed as the original tale (though to be fair, not many people could reach that standard in their prime let alone 25 years later), still connects to this world, and his character design remains fantastic.  The colours from Brennan Wagner perfectly conveys the film noir feel Loeb and Sale are going for and letterer Richard Starkings shines, using different fonts from when Harvey speaks or Two Face speaks, adds a subtle touch that just adds to the overall atmosphere of the book.

The ending is both definitive but also open ended.  If it all came to an end her then this was a perfect, unexpected send off.  Though a thread or two remains, so if Loeb and Sale ever wanted to revisit this world, they would have my money.  A thoroughly brilliant one shot title.

And if you haven’t read the original The Long Halloween, stop reading this right now and go do yourself a favour and grab it right away.  In fact, talking about it, I may just indulge in a re-read myself over the weekend…