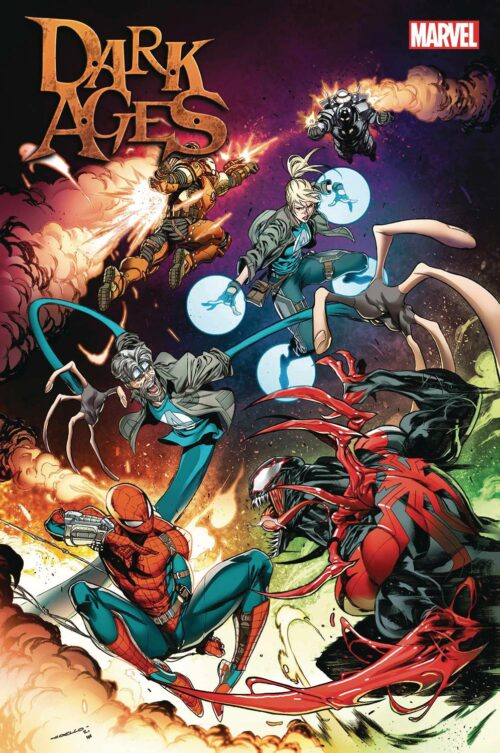 This was a seriously tough week to narrow down to one pick of the week. The 30th March saw the return of Something is Killing the Children, the return of Ram V’s Swamp Thing, Issue 2 of Jock’s One Dark Knight, the best issue yet of DC vs Vampires, and the excellent opening chapter of Shadow War Alpha. In other words, a ton of DC goodness, yet it was a Marvel title that just edged it for me, and it was Tom Taylor’s swan song to Marvel.

We’ve spoken about it before, but it is a bit of a shame that Tom Taylor has signed exclusively with DC. Of course, I have a preference for DC, so more titles from him playing in that sandbox are of course welcomed. However, his Marvel work has been nothing short of stellar from All New Wolverine, to his War of the Realms one shots, to Friendly Neighbourhood Spider-Man and now Dark Ages.

And Dark Ages has so many moving parts that it easily could have been a 12 issue maxi-series. So if there’s one tiny criticism for this issue, it’s that some parts are maybe a little rushed, but you’ll barely notice to be honest because of how many brilliant, genuinely jaw-dropping moments there are in this final issue.

#6 picks up after Peter Parker was able to save Miles Morales from the twin threats of Venom and Carnage (and what a great issue that was as well), Peter Parker and the rest of the heroes learn of Apocalypse’s plans to project his consciousness into the Unmaker, and take over the entire universe. They must also deal with Purple Man (what an adversary he has been in recent Marvel titles by the way), who has exerted his will over their friends! Will the world be saved, or will Darkness prevail?

This being a Tom Taylor, outside of canon book, the great thing is you know that no-one is safe. Heroes will be sacrificed and lost along the way, stakes will be raised, and the heroes may not necessarily win in the end.

As well as weaving an entertaining and tense narrative though, there are also interesting themes at work here. At its core Dark Ages goes against the grain of the usual “dark future” trope that often populates alternate-universe comics. And that has remained true through the series; it’s very interesting that the ultimate goal is for the heroes of the Marvel Universe to make a better world despite the loss of technology. “Who says a post-apocalyptic world has to be a bad thing?” Parker says in one of the series’ most emotive moments.

Taylor also is able to display the perfect balance between the grimness of the situation and injecting humour into the tale. He even achieved the impossible throughout this book in my eyes, as he was able to make Deadpoool both hilarious and an integral part of the heroes plan. Too bad we’ll never see a Tom Taylor scripted solo Deadpool anytime soon, as I would have been all over that!

The writing is of course on point, but the book succeeds just as much because of the wonderful art, and issue 6 is Coello’s best work in the series. He delivers some jaw-dropping action sequences. There’s a brilliant sequence involving Wolverine going up against a mind-controlled Cyclops (though he is still cognitive and knows what he is doing. He tries to keep his eyes closed for as long as possible), with the X-Men leader’s optic blasts shredding his teammates’ flesh and bone off in a series of horrific panels (this book is not one for Wolverine fans who don’t want to see their hero bettered. This was one of those jaw-dropping moments I mentioned before).

There is an absolutely amazing two-page spread which depicts the Purple Man’s mind-controlled heroes against their counterparts; Colossus and She-Hulk wrestle, Doctor Doom engages in battle with Dracula, and Spider-Man darts around Captain America. It’s pure wish fulfilment from when you were a kid and you wanted to see these heroes do battle to find out who is the toughest and best. We even get a great moment involving Blade, which is few and far between in modern Marvel titles (side note, can we please get a Rodney Barnes scripted, Jason Shawn Alexander drawn Blade book sometime soon…)

This was a brilliant series and when it hits trade I cannot recommend it enough. It delivers a fitting swan song to Tom Taylor’s time at Marvel and Coello’s art was a more than worthy companion to this bittersweet, goodbye tale.