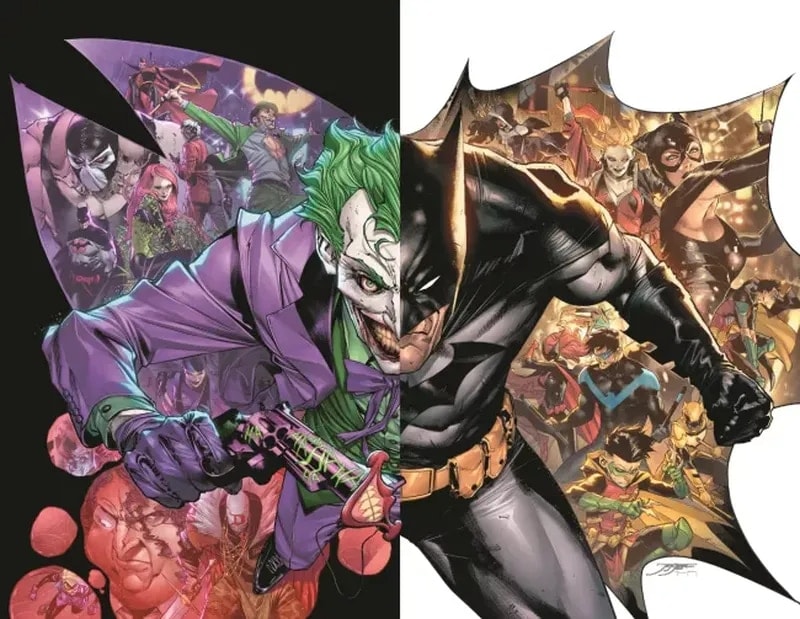 A fantastic conclusion to an awesome Batman event.

I don’t think it can be underestimated what James Tynion IV has achieved with his Batman run (He’s tripled the amount of people who have Batman on their pull list in our store) .  In the first arc, he created new characters aplenty and created a compelling story with ‘Their Dark Designs’ (available in trade very soon).  During that run, he was also able to sow the seeds that would grow into Joker War.  And boy, it did not disappoint.

All the tie-ins certainly added texture, with particular praise reserved for Batgirl and Nightwing, but it was in the flagship title that this storyline soared, both in terms of writing and in art, which seemed to get better with every issue.

And so we arrive to #100, an oversized issue that arrived with a pleasing lack of variant covers (unlike Detective #1027 and all of the DC 80th anniversary specials).  It is an issue that can be broken down into three separate parts, which are at turns linked and at others, their own tale.

Part One is the main body of the issue as Batman faces off against The Joker (in his own take on the Batsuit).  But before we even get to the two old foes, we get a very crowd pleasing moment of Barbara Gordon relinquishing her Batgirl persona and adopting that of Oracle, Batman and the rest of the Bat-Family’s eyes over the city, and calming voice in the ear during the tensest moments.  There’s even time for a reunion of sorts between Babs and Dick Grayson. 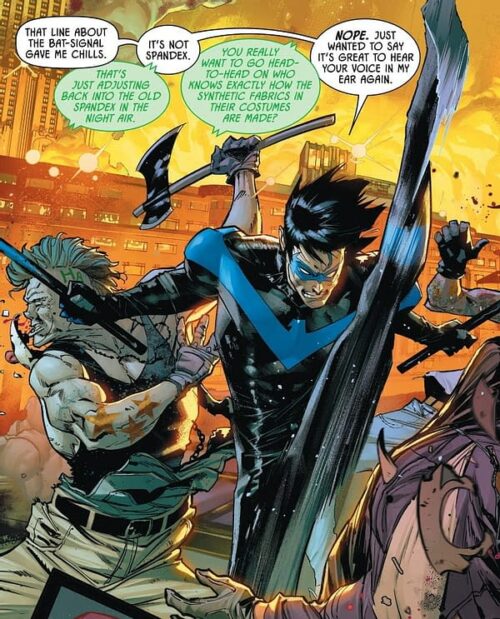 Nightwing in particular shines in this issue, providing humour and ass-kicking aplenty, and it bodes well for Batman’s own future that the eponymous sidekick is clear headed and refocused after his recent sojourn into the land of Ric Grayson.

But onto that face off between Batman and Mister Jay, it is by turns horrifying, graphic, brutal and psychological.  Joker uses all the tricks at his disposal including Alfred, and Bruce’s guilt over not being there; trying to belittle Batman’s mission and pointing out the absurdity of it; and even the painful reminders of the death of Bruce’s Parents (though I am relieved to report there is not a panel with a broken pearl necklace in sight…)

The fight ends with Harley stepping in and offering Batman a choice.  Stay and save The Joker, or chase after her and defuse a bomb strapped to her chest.  Harley has been another emerging star in the Bat Books recently, with great turns in Suicide Squad, Harleen and here in Batman itself.  She even gets in a good shot at The Joker which may alter his appearance for the foreseeable future.

The first part even ends with the introduction of a new character, and a set up for what to look forward to with Tynion’s run.  And I have to say, the future looks bright… 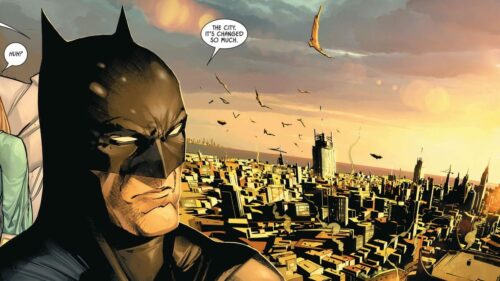 And that’s without mentioning the second part which delves into the character of Clownhunter, and then Part Three, well….I wouldn’t want to spoil the surprise.

I also cannot overstate just how good Jorge Jimenez’s art has been through this run, and I’m delighted to see him announce that he’ll be sticking around on Batman for some time to come.  Genuinely career best work, and it’s going to take some topping.  I’ll look forward to seeing him try.

Suffice to say, pick up Batman #100, I’d even recommend it as a starting point given the set up for future storylines as well as the conclusion of Joker War.

James Tynion IV, when you were announced as writer for Batman after Tom King?  You had our curiosity.  Now, you have our attention….