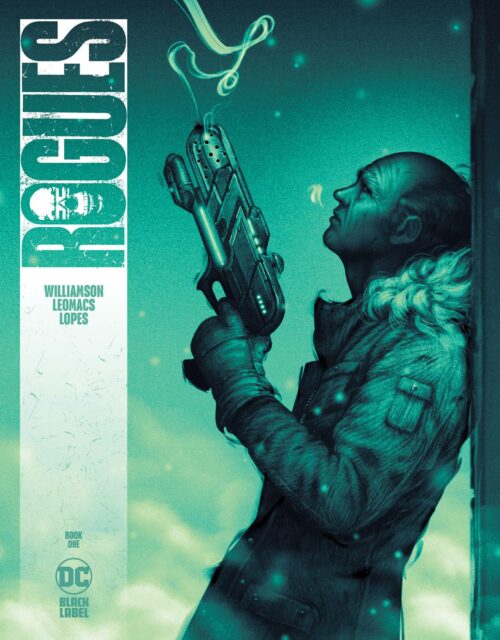 An Oversized Black Label series focusing on the villains from The Flash. It’s not the easiest sell for a book. After all, the Premium Plus Black Label books have a divisive size and format, are more expensive than regular comics, and for once Batman/Joker are nowhere to be seen! But then you factor in Joshua Williamson, a man who knows the Flash Universe inside and out, after a legendary Rebirth run. And then you have Leomacs on art, an Italian artist I greatly liked on Basketful of Heads, and has a style all of his own, and you have the ingredients for a great book.

And this is a brilliant book.

Rogues #1 opens up with a flashback, setting the scene. We have a bar fight involving loads of villains and anti-heroes who feel hard done by. They didn’t make enough money, didn’t cause enough chaos, didn’t get credit when they actually did something good because they were seen as villains, never heroes. It’s a fun way to open the book, is visually fantastic and a great way of incorporating loads of characters who have maybe been overlooked over the years.

Flash forward ten years and Captain Cold (Leonard Snart, our main character for the series) and his cohorts are well past their prime. Snart is now working a soul crushing factory job in his twilight years and he even keeps up with his parole officer. He seems reformed, for better or worse, and has left that life of crime before, his exploits confined to the annals of time and sharing stories over a drink about the ‘good ol’ days’. Some people do still recognize him as the villain and previous mastermind but to most people he’s just plain and non-description. You wouldn’t even give a second look to old Leonard Snart.

But does any criminal every truly reform? Do they ever leave that life behind? After all, they were able to plan and execute some of the most daring and dangerous heists in the history of Central City. Maybe they have life in the old legs yet? Maybe it’s time for one final score and then the ride off into the sunset. But Snart cannot pull off such a thing on his own, he’s going to need to get the band back together. However, they are all at very different places in their lives, and not sure they want to get mixed up with Snart again.

Snart is collecting his colleagues from all walks of life and from different parts of his colourful past. Lisa Snart, also known as the Golden Glider, is now a social worker, and her life is devoid of any excitement or joy. James Jesse, better known as the Trickster, is now a self-parodying showman under the purple and red lights of a run down, second rate casino showroom. And let’s not forget Mick Rory, Heat Wave, who hasn’t fully given up his arsonist past and remains committed to the role of super villain. Clearly some of them are going to be easier to convince than others.

The writing and set up is fantastic as you would expect, but for me, Leomacs steals the show with his expressive, detailed and versatile art. He does an absolutely fantastic job working each character’s complicated past into their look. Each of the Rogues are world weary and victims of aging. There are bags under the eyes, scars that have not healed, and they are no longer fit and able 20 somethings able to cause havoc at a moments notice, but because of the brilliant character design, they are all instantly recognisable. Similarly, Central City is both familiar and unrecognisable, certainly to Snart. It has the look and feel of a place leaving these old timers behind, and they really don’t want to change to keep up with the times.

This is like Ocean’s 11 mixed with the Flash Universe. Even though these characters are by all definition, villains, there is a likability to a lot of them, and you find yourself rooting for Snart. Well, you will for most of the book anyway. The first issue does end on a dark note, and does remind you just how vicious and violent these villains can be when pushed. They reach a point of no return, and Snart is definitely not going back to his day to day work at the factory.

This title was a joyful surprise, and I knew it would be pick of the week as soon as I read it. Cannot recommend enough, and even if you;’re put off the size of Premium Black Label titles for single issues, make sure to pick up the collected edition when it comes around.