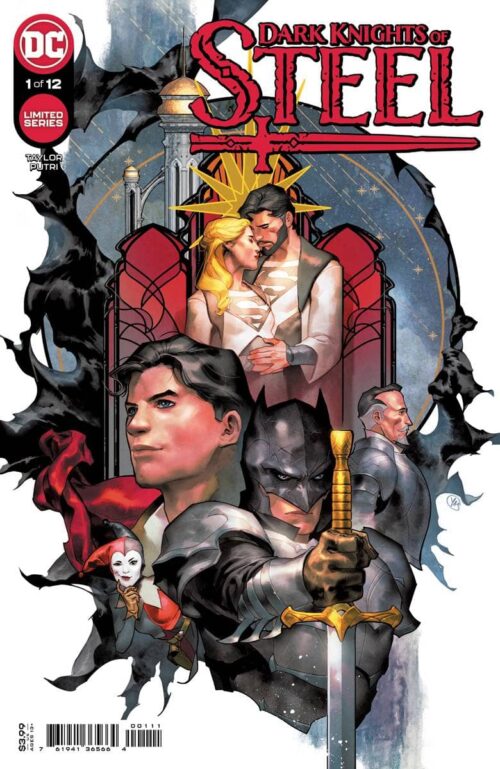 Welcome to the latest edition of the Tom Taylor corner, who we have recently learned has signed exclusively to write for DC.  And as a DC fan, this is certainly excited, though I had always secretly hoped for another volume of Friendly Neighbourhood Spider-Man….

But anyway, back to the DC Universe meets Game of Thrones.  This was an exceptionally fun opening issue.  We see the familiar beats of Krypton exploding, and Jor-El and Lara talking about needing to send their son away from here and start a new life.  Thew twist this time?  The parents actually flee their dying planet with their son this time.  They crash land in a strange place, where Jor-El instantly uses his powers to defend his family.  At the same time, a seer named John Constantine is having visions of strangers arriving and how they will spell humanities end.

Flash forward 19 years and Kal-El is all grown up and the lands are now known as the Kingdom of El.  Bruce Wayne’s parents used to rule the lands but are now deceased and have entrusted the ruling of the land to Jor-El, relying on their abilities and moral fibre to rule over the kingdom, and usher in peace.  Batman acts as a Knight for the El Family, and is dark and brooding as we’ve always come to know him to be.  He has a fleet of Robins under him to utilise.  And Harley Quinn is present as the King’s Jester and provides most of the comic relief for the issue.

The main hook that they story ends on is to do with Bruce Wayne’s heritage.  He was subject to an attack from this worlds Black Canary, whose scream should have torn Bruce to pieces.  However, he survived and is not sure why any mortal would have.  He believes himself to be cursed.  But maybe in this world, Bruce Wayne is more than a mere mortal…

This was an awesome first issue.  As ever, Taylor’s strength is in his world building and his trust in his audience that they will recognise characters from the DC Universe, and enjoy his twists on those characters.  In the first issue here we are introduced to Batman, Superman, Constantine, Black Lightning, Black Canary, Harley Quinn, Stephanie Brown, Dick Grayson, Green Arrow and more.  Batman and Superman are almost warring brothers, unsure of each other’s motives and practices.  It’s a relationship that has been explored in so many ways in previous comic series, yet Taylor may have just found a fresh take here given revelations that are unearthed towards the last few pages.

Yasmine Putri’s art is fantastic.  It is by turns bright and heroic, but also dark and foreboding.  It is a perfect fit for this kind of material.  The designs of the character’s suits all include subtle hints to classic looks meaning you know who is who, but they also feel new and interesting.  She also does the colouring work for the series and it elevates the art even further.

A supremely confident, entertaining and beautiful start to DC’s latest maxiseries, and once again Tom Taylor remains a writer you know will deliver.