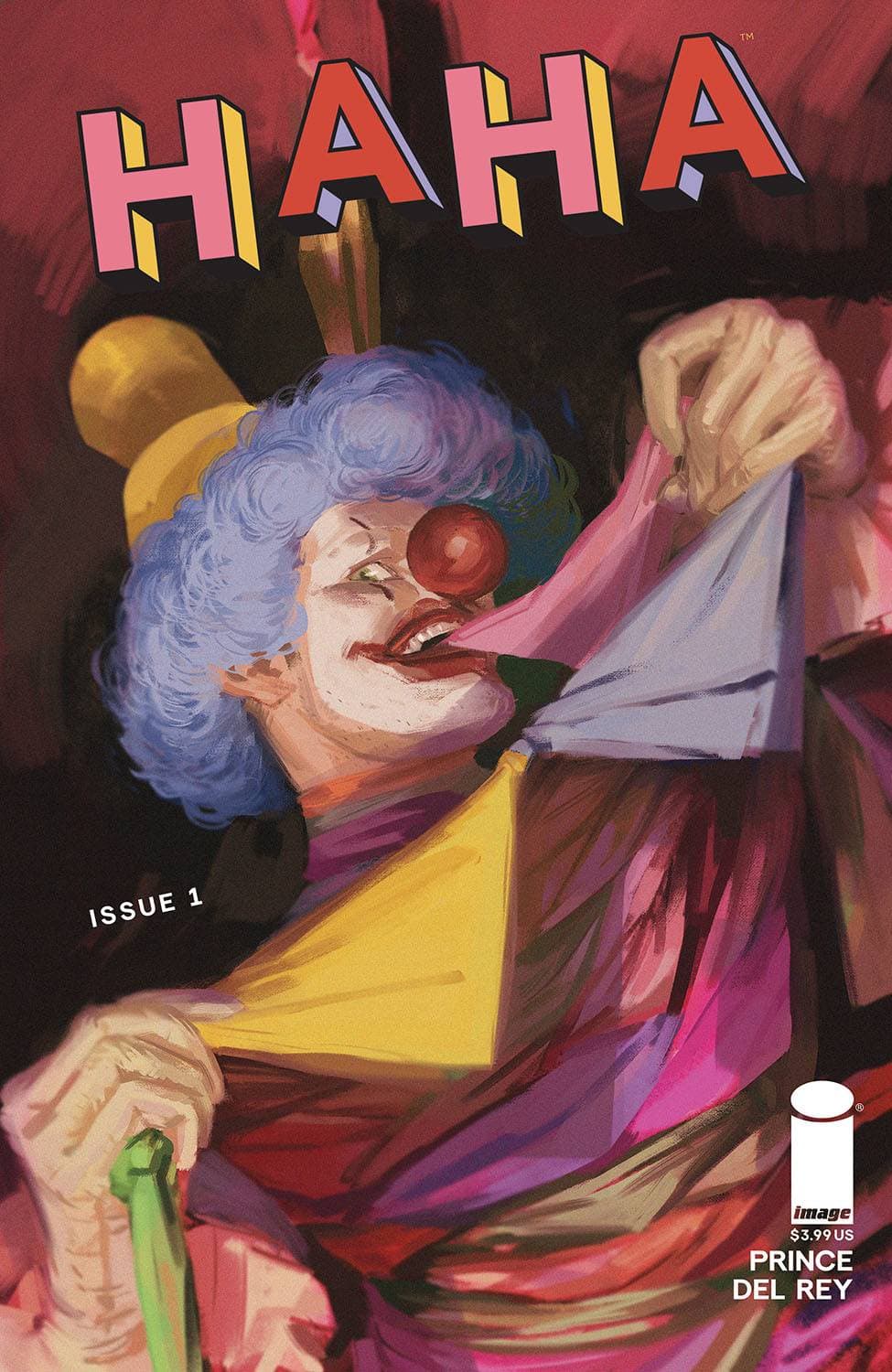 One of the breakout hits from Image comics in the last few years has been the universally acclaimed Ice Cream Man.  An anthology horror series, it regularly appears on Best Of lists and in awards categories.  So it was with much excitement that I looked forward to HAHA, another new anthology series from the writer of Ice Cream Man, W. Maxwell Prince.

Ice Cream Man’s artist Martin Morazzo is not along for the ride this time, as each issue will feature a different artist, and first up is the stellar work of Vanesa Del Rey (who has worked on titles such as Scarlet Witch, The Empty Man and Redlands)

Instead of an exploration of a creepy Ice Cream Man, here we are introduced to another childhood fear (or wonder depending on your preference), that of a Clown.  We are introduced in Issue 1 to Bart, a working clown who has a wife and two kids.  It’s clear from the outset that his family consider his career to be a joke, and not the funny kind.

Things go from bad to worse as he loses his job as Funville, his place of work, is not faring well in the modern world.  People are just not flocking to the circus and amusement parks anymore, preferring to bury their heads in the latest technological fancy instead.  His boss comes across as a nice enough guy and even pays him a severance, but a few dodgy individuals have their eye on that check…

Bart is an optimistic guy to the point of parody.  Nothing is going to deject him.  Not being robbed, not the lack of respect from his family, not even the lights going off.  But is he optimistic as his sunny demeanour suggests, or is he just rejecting reality?

The saying goes, everyone is just one bad day away from going crazy….

There is so much to sink your teeth into in this book.  It is by turns bleak and hopeful, has madcap but dark humour, and an everyman who you are rooting for but maybe just can’t quite shake the feeling that it’s all going to end badly for him. He is the personification of that American Dream – the stable life, the wife and two kids, the house and maybe just a bit of respect.

But the world he inhabits won’t let him have even that, beating him down at every opportunity, and surely there is only so long he can keep a smile on his face, painted on or otherwise.

Del Rey’s art is fantastic as always, expressive, emotive and just plain great to look at.  And Chris O’Halloran continues to do his best to steal Jordie Bellaire’s crown as the busiest colourist in the industry, already working on Immortal Hulk, Ice Cream Man, Black Panther, Scarenthood and Write It In Blood to name but a few.